El Niño contributed to a mild winter in the Miami Valley

If you thought the region got off easy this winter, you’d be right.  And you can thank El Niño.

El Niño is a weakening of eastward blowing winds over the Pacific Ocean creating warmer than normal water in the eastern Pacific Ocean near the equator. 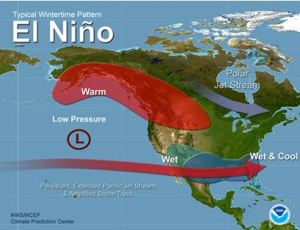 El Niño tends to keep the polar jet stream—and cold arctic air—farther north and out of the Miami Valley. It also tends to shift the Pacific jet stream—and winter storm systems—to our south. Together these patterns tend to produce warmer and drier winters locally.

Above average temps and precip
Average monthly temperatures for January through March were well above normal, according to the National Oceanic and Atmospheric Administration (NOAA). Dayton saw above-normal daily average temperatures all three months. This is exactly what we expect during an El Niño winter. The 2016 winter was the 10th warmest recorded for this region, dating back to 1895.

It’s anyone’s guess as to why precipitation was greater than expected. Other factors besides El Niño influence local weather. Sometimes the random nature of weather is beyond our ability to predict.

La Niña on the way?
While El Niño 2015/16 was one of the strongest ever recorded, it’s weakening. Most climate forecasts predict it will end during late spring or early summer and will eventually change over to a La Niña phase. Some forecasters expect that shift this summer.

It’s too early to tell how La Niña conditions in the Pacific Ocean will shape our next winter. Stay tuned.