By Mike Ekberg, manager for water monitoring and analysis

Groundwater may seem mysterious. You can’t see it. You can’t hear it. You can’t touch it. Yet, it may be the most important resource we have because, quite simply, we can’t live without water. While this region has plenty of good quality groundwater, we can’t take it for granted.

On March 11-17, help us celebrate National Groundwater Awareness Week by busting some myths about groundwater.

Myth: Groundwater in the Miami Valley is found in an underground river

Fact: Rain soaks into the ground and moves downward until it reaches a point where all of the pore space is filled with water. Groundwater occupies the tiny pore spaces between individual particles of sand and gravel or fractures in rock, and it moves through those spaces. Porous materials that can store usable quantities of groundwater and allow it to flow are called aquifers.

Fact: Groundwater can move at a rate of 0.5 to 50 feet per day in a productive aquifer. That’s pretty fast for groundwater! At this rate it would take groundwater at least six days to travel the length of a football field. Meanwhile, water in the Great Miami River could travel that distance in as little as 33 seconds!

Myth: Groundwater pumped from our region is never replaced

Fact: Rain and melting snow replenish our local aquifers. This region receives plenty of precipitation to replace the amount of water pumped for home and commercial use. And, most groundwater that’s used locally is returned as treated wastewater via the Great Miami River or one of its tributaries. In drier regions, however, water often is used at a faster rate than it can be replenished.

Myth: Groundwater and rivers and streams do not mix

Fact: Do you wonder why the Great Miami River doesn’t dry up? Even during a very hot and dry summer? Groundwater provides plenty of flow to our rivers and streams throughout the year – from 25 to 80 percent of the totally yearly flow. When river flows are high, these conditions can reverse and river water seeps into the aquifer becoming groundwater.

Myth: In the Miami Valley, rivers are the most important source of water supply

Fact: If you live in the Miami Valley, chances are high that your drinking water comes from groundwater. According to Ohio Department of Natural Resources, groundwater resources in the Great Miami River Watershed supplied people with 91.6 billion gallons of water in 2016. In comparison, surface water use was a mere 9.8 billion gallons. 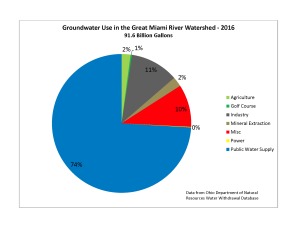 Here are a few things you can do to ensure your family’s health and protect our region’s groundwater: