Last year, pollution in Lake Erie halted Toledo’s delivery of its drinking water to 400,000 people for several days. It happened when water that Toledo pulls from the lake was found to have dangerously high levels of microcystin, a toxin that is produced by algae. Microcystin is highly toxic to the livers of humans and animals. When nutrients – nitrogen and phosphorus – are overabundant in lakes and river, the levels of toxin-producing algae may increase. Nutrients that contribute to algae growth come from many sources, including agriculture, lawn fertilizers, wastewater treatment plants, sewer overflows, leaking septic systems, and precipitation.

Could algal toxins shut down our water, too?
A similar scenario is less likely here because this region draws nearly all of its drinking water from the aquifer rather than a river or lake. However, an overabundance of nutrients in our watershed (the land area that drains to the Great Miami River), can lead to the growth of algae in our rivers, streams, and lakes. 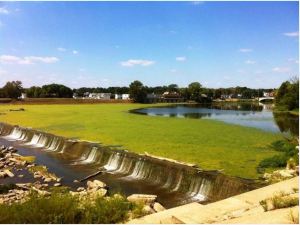 An algae bloom at Island Park Dam in Dayton during the summer of 2012.

An algal bloom is an abundant or excessive growth of algae. Some algal blooms do not produce toxins, but can still cause problems for aquatic life such as changes in fish population including death, and nuisance problems such as thick mats of algae that reduce access to water for  recreation.

Algal blooms are not the only problem in our water. About 40 percent of the rivers and streams in our watershed fail to meet Ohio water quality standards. Excess nutrients are a main cause. And those same nutrients negatively impact water that flows downstream to the Ohio River all the way to the Gulf of Mexico. 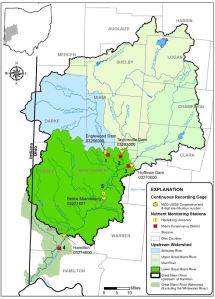 How do we know what’s in our waterways?
The Miami Conservancy District has regularly collected data from our rivers on the levels of nutrients since 2004. The data tells us that the levels of both nitrogen and phosphorus are too high at certain times of the year. The levels change with rainfall and other seasonal conditions.

Because it is also possible that toxin-producing algae grow in our watershed, the Miami Conservancy District tested for toxins in algal blooms in the Great Miami River in 2012 and 2014. So far, no toxins were detected.

A common sense approach to reducing nutrients
Because more than 70 percent of the land in the Great Miami River Watershed is used for agriculture, the majority of nutrient-related water runoff relates to farmland use.

The Miami Conservancy District has partnered with federal, state, and local partners to create a program, called the Great Miami River Watershed Water Quality Credit Trading Program, that reduces polluted runoff from farmland. Farmers are paid to reduce nutrients from flowing into rivers and streams.